Stronger Than Ever - Student Giving

Five years ago, a group of CBC teachers received an assignment while participating in a Lasallian Leadership Institute. They were challenged to develop a new program they could bring back and implement at our school. The goal was to create something that could really make a difference.

The idea they settled on was simple:  Every student benefits from the fact that the CBC community includes young men from all backgrounds. That reality isn't possible without financial aid, so why not develop a system of giving that provides an opportunity for each Cadet to make a small contribution to help further CBC's inclusive mission.

They hammered out the details and the Brotherhood Scholarship was born.

Mr. Ed Hamer is one of the scholarship's founders.

"We thought it would be a good way for the students to begin giving back and learn to be generous," Mr. Hamer explained. "The idea is for them to give from their own money and not ask their parents for it.  We were hoping it would become a source pride for each class to be giving to future Cadets.

For those who aren't familiar, the Brotherhood Scholarship is funded completely by students, who contribute each year of their high school career.  Freshmen are asked to contribute $5; sophomores $10; juniors $15; and seniors $20.

The goal is to have each class lay the groundwork for an endowed scholarship that will provide opportunities for future Cadets. Brothers helping brothers.

The program is promoted and encouraged on campus, but the decision to participate still rests with each young man. The results have been incredible.

Over five years, the rate of participation has been over 96% and more than $40,000 has been raised to help make CBC a reality for young men and families with financial hardships. While the idea is based on the power of wide-spread participation, the effort has also delivered some stand-out acts of individual generosity.

Recently, sophomore Evan Robinson donated the money he earned while playing music for tips (commonly referred to as "busking") near Busch Stadium after a Cardinals game. Evan is a regular outside Busch Stadium (he also competed on the last season of American Idol) and he promoted the fact that his tips for the night would go to CBC. He was thrilled with the response he received from alums and supporters.

"It is by far the most I've ever made playing at a game," Evan said. "So many alums came by to say 'hi' and to give a few dollars. It was a great time!"

Thanks so much for this generous contribution, Evan! And thanks to each of our young men for doing their part to make a CBC education available to future Cadets! 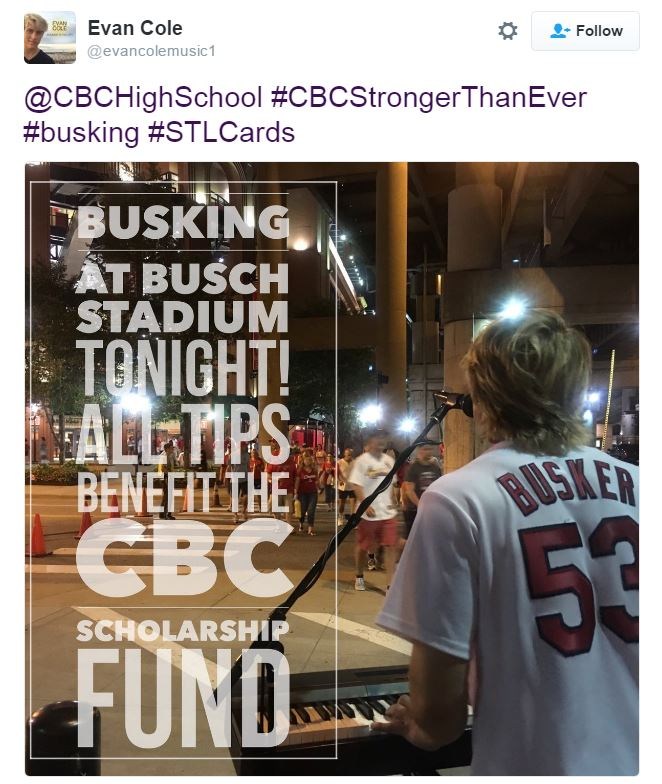