Stronger Than Ever - An Elite Education

An Elite Education for Every Young Man
Our football team made the quick bus ride down Hwy 40 to face MCC foe Chaminade a few weeks ago. Our guys were winning by the score of 27-0 early in the second quarter when a tired little chant began to roll out of the Red Devils' student section.
"ACT SCORE (clap, clap, clap-clap-clap) ACT SCORE (clap, clap, clap-clap-clap)"
First, before we get into the inaccuracy of this uninformed cheer, let's all acknowledge that we must have a pretty good football team if our opponents are attempting to transition to academic debates before the game even reaches halftime. Hats off to Coach Pingel and the boys!
Now, back to their silly claim of superiority.
I guess they don't know that our school has some of the smartest guys in St. Louis. In fact, the top 10% of the Class of 2015 averaged a 32.5 on the ACT test - an elite mark. Let's make a point to introduce them to guys like Drew Hansen, Caz Smith, Reed Sahadevan or Derick Speltz (who was also starting at middle linebacker that night.) These four, along with many, many others, excel in the classroom and perform exceptionally well on standardized tests. We are very proud to have them at CBC, but we love them because they are caring leaders who aspire to do amazing things - not because of their ACT score.
It's more likely that those fans were referring to the fact that CBC is an inclusive school community. We proudly accept a wide range of students with a variety of gifts and talents. Sadly, some in the St. Louis community attempt to spin this as our school's weakness. Well, the joke's on them, because it's actually our greatest strength.
The diversity of talent, interests, and life experiences that exist on our campus is what makes CBC so special. And, just to set the record straight, every Cadet is benefiting from the elite education they are receiving at CBC. We know this because we measure more than just ACT scores.
An important example of this fact is the student growth-over-time that is measured through NWEA standardized test scores. We've crunched the numbers and CBC student growth in Math and English is more than twice the national average. Our guys aren't just improving, they are excelling.
This is a testament to our students' hard work and our teachers' commitment to helping every young man succeed.
It's unfortunate, but the "ACT SCORE" chant is just one example of the misinformation that some around St. Louis spread about our school. It's just plain inaccurate. Be confident that your son is receiving the best education and student experience in St. Louis. And, when people claim otherwise, be sure to set the record straight - that's exactly what we did at that Friday night football game, and it only took 140-characters! 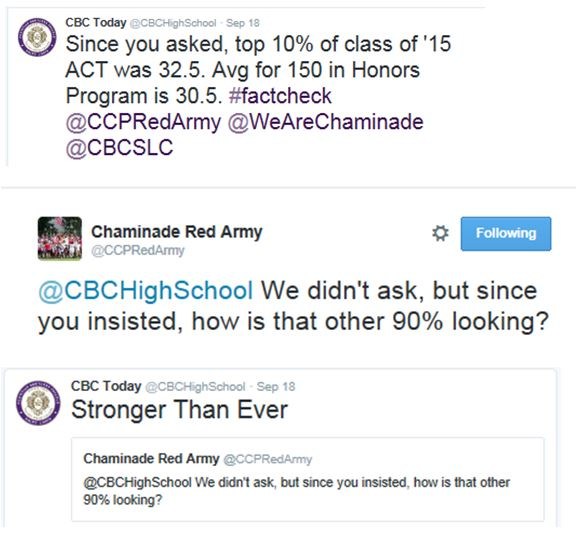