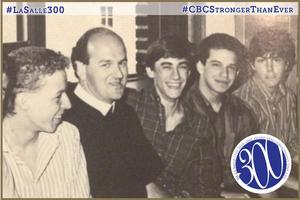 Thank you for joining us on our Founder's Week journey! Our students have summarized the key events in the life of St. John Baptist de La Salle and spend time each day reflecting on our Lasallian mission.

Less than three weeks after the joy of his ordination to the priesthood, De La Salle’s close friend and spiritual director, Fr. Nicholas Roland, dies suddenly, leaving De La Salle as executor of his will.  In this capacity, De La Salle is tasked with resuming the complicated work Roland had begun of gaining legal and ecclesiastical recognition for the Sisters of the Child Jesus, a community of Sisters dedicated to the education of poor girls in Reims.  He is successful, and to this day, the Sisters regard De La Salle, along with Roland, as a co-founder of their Institute.

In the Spring of 1679, a wealthy benefactress and admirer of the Sisters’ work with poor girls, Madame Maillefer, sends Adrien Nyel to see about starting a school for poor boys just as the Sisters had done for the girls.  Nyel and De La Salle meet somewhat by chance at the doors of the Sisters’ convent in Reims and De La Salle agrees to help Nyel with the founding of a school.  As the Founder would later recall, he thought that he would help with this one school and that would be it for his work with education.  Little did he know that this “chance encounter” with Nyel would irreversibly alter the course of his life.

Reflection: How do we mourn our losses and continue with our daily lives?

Prayer: Within the first few weeks of his priesthood, St. John Baptist De La Salle lost a close friend named Fr. Nicholas Roland, who was also his spiritual director. De La Salle was filled with grief. Through God’s grace he recovered and was able to continue his work for the Church. Lord, we ask you to give us the strength to mourn any losses we have in our lives. Help us keep the strength to persevere through our daily lives. Amen.

By Easter 1680, Nyel and De La Salle have collaborated in founding two successful schools at parishes in different parts of Reims.  It soon becomes apparent, though, that the young men teaching in these schools are not sufficiently trained or supported in their work.  These are essentially men off the streets who know little more about their lessons than their students do.  In order to support these teachers, De La Salle invites them into his own home for meals beginning in 1680.  Over the course of the next year, they spend more and more time in his home and their work in the schools begins improving dramatically.  De La Salle’s family, however is horrified—the gulf in social status between these teachers and De La Salle’s family makes this interaction nothing short of scandalous.

Nonetheless, De La Salle continues spending more and more time with his teachers, and on June 24, 1682, he sells his home and moves with a small group of teachers to a simple house on the Rue Neuve in Reims.  According to biographer Br. Luke Salm, De La Salle is “leaving behind once and for all the comfortable world in which he had grown up to become part of the world of the poor.”  This house has come to be known as the “Cradle of the Institute,” and it is here that De La Salle and his teachers first call themselves “Brothers.”

Reflection: How do I help people continue their mission in daily life?

Prayer: Dear Lord, we ask you to give each of us the strength to help others through whatever hardships they may be experiencing. De La Salle helped the school by offering training to the teachers. As he did this the teachers got better at their work in their school. We ask that you inspire us with the same courage to help others become better at what they do for you. Amen.

De La Salle is challenged by his Brothers

Not long after the move to the house on Rue Neuve, the teachers express concern about what will happen if the community and schools should collapse.  De La sale tells them to trust in God, but they reply, in no soft tone: “It is easy for you to talk.  You have everything you need.  You are a rich canon with a regular source of income and a guaranteed inheritance.  You don’t know what it is to have to do without.  If our enterprise falls apart, you will survive . . . but we are without property, without income, and we don’t even have a marketable skill.  Where will we go or what will we do? . . . The only thing we will have left is our poverty and the only solution will be to go out and beg.”

Reflection: How do we put all our trust in God?

Prayer: Dear Lord, help the people who don’t have enough confidence. Help them to express their trust to the point where they can believe and put all their faith into God. Increase our trust and confidence in you. Help us to hear the voices of those with very little to call their own. Amen.