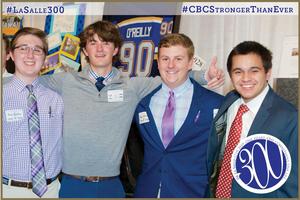 Our celebration of Founder's Week continues! Thank you for joining our students on this exploration of De La Salle's life. Live, Jesus, in our hearts - Forever!

Although initially taken aback by the harsh rebuke of his brothers, De La Salle takes their words to heart.  After careful prayer and consideration, he comes to see very clearly the call of God in this moment.  On August 16, 1683, he shocks the city of Reims by resigning his canonry.

Reflection: What is God calling us to leave behind and to do? Could we be as brave as De La Salle was when he felt God’s calling to focus on education?

Prayer: De La Salle was very brave to resign his Canonry to focus on education. He heard God’s call and acted on it. When we are faced with a difficult decision, help us Lord to do what you ask of us. Help us with the grace you gave De La Salle to follow your will. Amen.

Distributes his money to the poor in time of famine - trusting in God for schools - money was not given there.

Once Fr. De La Salle has resigned his canonry, he is now without the considerable income that position generated, but he does have other financial assets in the form of property and inheritance.  His intention is to give these away, too.  Naturally, his Brothers expect him to contribute the proceeds to the operation of the schools.  One can imagine their reaction when he decides not to do so. De La Salle believes deeply in trusting God’s Providence, and he believes that if God wills the schools to be successful, then they will be—with or without his money.  If, on the other hand, God does not will the schools to succeed, then even his money will not help.  Thus, he trusts in God.  His money is not given to the schools, but is spent instead distributing bread to the many starving men, women, and children of Reims throughout the famine of 1683-1684.  The command of Christ had become clear to him: If you wish to be perfect, go, sell all you have, give it to the poor, and when you have done that, come, follow me.

Reflection: How is it we hear and believe the words of Jesus when they are difficult or challenging?

Prayer: Lord, sometimes your words in the gospels seem almost impossible to believe. Turn the other cheek? Love our enemies? Sell all we have to give to the poor? And yet we know you give us the grace and help to do what you ask of us for a greater good. Help us to be generous, like Saint John Baptist de La Salle, in following you. Amen.

Following the public resignation of his canonry and divestment of his wealth, the eyes of Reims are on De La Salle and his Brothers.  Recognizing this, in the winter of 1684-1685, they adopt a distinctive habit to wear publicly.  He wants his brothers to be distinguishable from both lay teachers (who generally wore a regular jacket and pants) and clergy (who wore a full-length black cassock, or robe).  They begin wearing a shorter cassock that comes down only to the calves.  It has no fancy buttons but is hooked from the inside.  They wear a white rabat (clerical collar) around their necks and a black hat on their heads.  On their feet they wear thick-soled black work shoes like any peasant or workman would wear.  It is at this time, as they take on their distinctive apparel, that they become known as the Brothers of the Christian schools, the name the Brothers still bear today.

Reflection: How do I demonstrate who I am through what I wear and how I act in front of others? What do I do to show with whom I stand?

Prayer: Dear God, throughout the world brothers and sisters of Christian orders wear a distinctive garb after taking their vows. They do this to distinguish themselves from other orders but also to show that they have devoted themselves to you. Help us to be like them, who, with conviction wear the same garb every day to show their love for you. Help us to show the same conviction in what we do. Help us, Lord, to use your grace in service and devotion in the things we aspire and work to uphold in our day to day lives. Amen.

De La Salle believes that his schools should be offered free of charge to any student who came to them, just as God offers the gift of Salvation.  This is received well enough in the case of students officially registered with the local parish as being “poor.”  Students without this designation, however, are expected to attend schools for which they would have to pay, and the thought of De La Salle accepting these students into his free schools is abhorrent to the local school masters who see their livelihood being threatened.

Reflection: Do we take our Lasallian education seriously? Why or why not?

Prayer: Each day we have the great gift of coming here to CBC for our education. Our parents have made sacrifices to send us here, and many benefactors have been generous to help students with the cost of a great education. Instead of complaining about going to school, let us instead thank our parents for sending us to school. Let us pray for the donors who make gifts to CBC, and for administrators and teachers who guide us. Help us to try our hardest to reward our parents and teachers for all that they have given us. Amen.