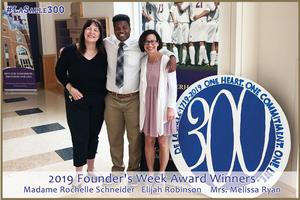 We complete our Founder's Week journey by exploring the final years of De La Salle's life and asking ourselves how can best carry-forward our Lasallian legacy.

In his despair after nearly 15 years of constant trials, tribulations, and illness, De La Salle seeks the peace and quiet of a mountaintop retreat called Parmenie in the south of France.  There he spends the winter of 1713-1714.  The peace he finds there is good for his health and he seriously considers retiring there permanently, living out the rest of his days as a spiritual director for anyone seeking retreat there.

Reflection: How are we called to be like De La Salle when we face suffering that seems impossible to endure?

Prayer: Father we come to you today thinking about De La Salle’s legacy. We want to live our lives like De La Salle, with purposed and intent to make a difference. Keep us away from all evil. Lead us closer to you. Amen.

While he is convalescing at Parmenie, however, the Brothers’ situation in Paris was fast deteriorating.  Local Church authorities were encroaching more and more into the Brothers’ schools and their community life.  The Brothers there are struggling to maintain control and urgent help is needed.  Desperate for advice and support, they do the only thing they can think to do—they send a letter to Parmenie ordering Father De La Salle, in the name of the vow of obedience he pledged, to return to Paris and “take up at once the general government of the society.”  On August 10, 1714, after encouragement from the wise and holy Sister Louise at Parmenie, he arrives back in Paris.  “Well, here I am,” he says.  “What do you want of me?”

Reflection: How do we remember, maintain and uphold those duties entrusted to us in our daily life? And how do we respond to the work we must do?

Prayer: Dear God, in our daily lives we have obligations to uphold; however, the stresses of life can wear thin the conviction we must hold in order to perform these obligations. Just like your servant St. John Baptist De La Salle retreated to Parmenie in the face of sickness and strife in order to recuperate, we too need to seek refuge in you. Yet, when his brothers sent for him to ask his help, he did not rush to their aid. Instead, he consulted the wise sister Louise who maintained Parmenie, asking for her guidance in deciding his path. The sister encouraged him. She told him his path was still with his brothers in Paris. With these words in his heart he returned to Paris, telling his brothers “Well, here I am, what do you want of me?”.  Lord God, help us to be more like St. John Baptist De La Salle who in sickness and in health strove to uphold his obligations to you and your people. Help us to find courage to continue on the path you have given us. Amen.

April 1719—The Founder dies, surrounded by his Brothers

In the spring of 1719, De La Salle’s health has deteriorated and he in on his deathbed.  Brother Barthélemy, the Superior, asks him if he accepts the sufferings he is enduring.  He answers with his final words: “Yes, I adore in all things the will of God in my regard.” Shortly after 4:00 AM the next day, April 7, 1719 (Good Friday) St. John Baptist de La Salle dies.  Throughout the streets of Rouen where he had spent his last days, the word goes out that “The Saint is dead.”

Reflection: What is our attitude when people we love die? How do we help others to grieve the death of a loved one?

Prayer: We are all going to suffer. It is inevitable. Since the fall of man and the first sins of Adam and Eve sin and suffering entered the world. This is something that we all must deal with. Instead of blaming God for all the suffering that goes on, let us take up our own cross and accept the reality of suffering and offer it up to God. This action of sacrifice and suffering in our own lives will win us grace from God and bring us closer to him in our time on this earth. Amen.

At the time of his death, De La Salle had about 100 followers and 22 schools all around France.  The Brothers of the Christian Schools was not yet a recognized Institute—this would not occur until 1725.  In the wake of the French Revolution in the late 1700s, the Brothers expanded beyond France. In the fall of 1849 three Brothers arrived in St. Louis and began giving classes in a building adjacent to the Old Cathedral downtown.  This school, “The Cathedral Male Free School” is no longer in existence, but the following year, in the fall of 1850, another more permanent school was established at the corner of 8th and Cerre Streets just west of where Busch Stadium stands today.  This continues in existence as CBC High School. Today there are 1 million students and more than 87,000 Brothers and Lasallian educators at 1,000 different schools in 80 countries around the world.  We all trace our stories back to the life and legacy of the Saint whose name we bear when we call ourselves “Lasallians.”

Reflection: Do we live every day as Lasallians as we walk through the halls of CBC? What improvements can we make to the school to make it more like De La Salle would have wanted?

Prayer: We do not know what our future holds. But we do know God loves us and cares for us. He sends people into our lives who love us and whom we love. With the care from God, and the community we are given, friends and family to love us, there is no telling what we can do. Lord, help us to follow you like Saint John Baptist De La Salle, and to help continue his legacy here at CBC. Amen.