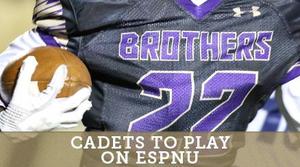 Christian Brothers College High School is excited to announce that our Sept. 20 football game against rival De Smet will be televised nationally on ESPNU as part of the GEICO ESPN High School Showcase series.

That home game, which will start at 8 p.m. CT, will be one of 18 high school football games televised on the ESPN network this season. ESPN’s Jay Alter and Craig Haubert will call the game.

“It’s exciting to see our boys get hard-earned recognition after two consecutive state titles,” CBC athletics director Rocky Streb said. “These youngsters are following in the footsteps of the guys who came before them and benefiting from the traditions that they’ve started.”