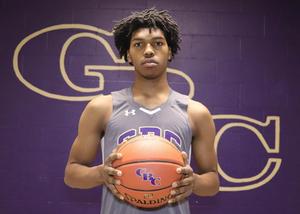 Congratulations to senior guard Caleb Love for being selected to play in the McDonald's All-American Basketball Game, which will be played April 1 in Houston.
CBC senior Caleb Love added another accolade to his impressive basketball resume on Thursday when it was announced he had been selected to play in the prestigious McDonald's All-American Game.
“To be in this position it’s just a blessing,” Love told STLhighschoolsports.com.
Love, a high-scoring point guard who signed with the University of North Carolina, becomes just the second CBC player to be so honored, following Larry Hughes, who was selected for the game in 1997. Love is the first St. Louis area player to be tabbed since Chaminade's Jayson Tatum in 2016.
Love proved himself as one of the best players in the state a year ago when he led the Cadets to a second-place finish in the state tournament. This year he's taken his game to another level, averaging 27.1 points, 6.8 rebounds, 2.9 assists and 2.4 steals per game.
The McDonald's All-American Game will be played April 1 in Houston.
Print