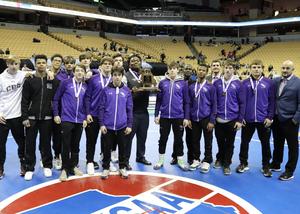 Congratulations to the wrestling team, which finished fourth in the Missouri Class 4 state tournament on Saturday in Columbia. Freshman Santino Robinson captured the individual state championship at 113 pounds, while sophomore Jack Darrah took second at 182 pounds.
Congratulations to the Cadets wrestling team, which added to its remarkable run over the last four years by bringing home the fourth-place trophy from the Missouri Class 5 championship on Saturday at Mizzou Arena in Columbia.
The Cadets, who had won back-to-back state titles, now have two championships, one second-place finish (2007) and one fourth-place finish in a four-year span that will go down as one of the most impressive in school history.
The fourth-place finish was fueled by six wrestlers who earned top-five finishes and spots on the medal stand.
Freshman Santino Robinson won the state title at 113 pounds and finished his season with a 35-4 record.
Sophomore Jack Darrah finished second at 182 pounds and finished 32-5.
Junior Vincent Zerban, who won a state title as a sophomore, finished third at 160 pounds and went 35-5.
Senior Alex Flerlage (120 pounds), junior Lucas White (170) and senior Luke Ebers (195) all finished fifth.
Print