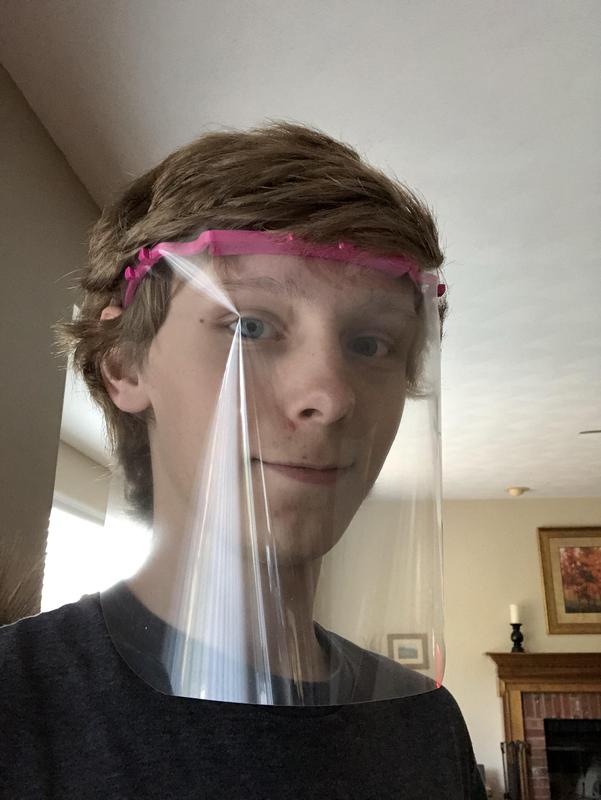 CBC senior Ben Young's father recognized a need for more personal protection equipment at his practice. Young and Engineering teacher Joe Henken came up with way to answer the need.

Ben Young already had a project in mind for his Engineering 2 project, something he even started working on several months ago.

“My original project was a Farnsworth plasma generator,” the CBC senior said. “It makes a small glowing plasma at the center of a vacuum chamber. I had been working on it since before the second semester, probably starting in late October.”

Young’s project idea changed recently when his father, Dr. Dan Young of Midwest Nephrology Associates, Inc. in Saint Peters, recognized a growing need with the outbreak of the Coronavirus/COVID-19 throughout the area.

“In late March, my dad met with his first COVID-19 positive patient,” Young said. “He was concerned that he was the only person in his office that had a face shield. Everyone had masks, but they need to last as long as possible without cleaning as cleaning reduces their effectiveness. He counted out the people in his office and asked me if I could help.”

Young contacted his Engineering 2 teacher, Joe Henken, with an idea to use 3D Printers to create plastic face shields for health care workers to use as personal protection equipment.

“Early in the quarantine, I became aware of the maker movement’s contributions to helping with personal protection equipment (PPE) and other medical devices, such as ventilator splitters,” Henken said. “Toward the end of Spring Break, as the situation was becoming more dire, there were several on-going initiatives, and it became a question not of ‘if’, but of ‘when and where’ we were going to help. This happened to coincide with Ben contacting me. He had seen an article on Forbes.com issuing a call for help. His dad, a nephrologist, was starting to see infected patients, and he wanted to help.”

Henken helped Young by providing him with CBC’s two 3D printers and “all the filament I could hope to use for this project,” Young said.

Henken said his mantra for Engineering 2 projects is simple: remove roadblocks, support as needed and stay out of the way.

“Students are capable of amazing things, especially when the project is personal and authentic,” he said. “For this project, the support was simply to get him the machines and make sure he had 3D filament. So far we’ve supplied nine 750 gram spools of 2.85 mm PLA filament. He found a design that uses a low cost and readily available clear plastic, so he’s sourced those himself. The ability to use this particular plastic — basically sheets of acetate, or overhead projector film — has been important to his progress.”

“There are many people from the maker community who are undertaking similar things,” Henken added. “One of the issues facing these initiatives is material supply. Some of the designs require very specific types/thicknesses of plastic that have become hard to find. Ben’s design is not beleaguered by this dearth of materials so far.”

After Young began making the face shields, Henken posted about the project on social media accounts on Twitter, Facebook and Instagram. From there, the interest in what the CBC senior was working on grew.

Henken said he’s been contacted by other high schools, an EMT in Southern Illinois and a periodontist in Peoria, Ill. Young created a detailed document on all processes surrounding printing, assembling and delivering shields that he is able to share with anyone who wants it.

Young, who plans to study engineering in college but hasn’t made a decision on what school he’ll be attending, is working on creating as many face shields as he can.

“I want to continue making shields until they're no longer needed,” he said. “I've already made about 70 and 60 of those have been delivered, and most are already being used.”

Young is hoping to personally make 500 over next several weeks but has had two other CBC students — senior Ben Brush and freshman Drew Zdrodowski — tell him they are going to use their 3D printers to help aid the effort.

Young won’t be making his Farnsworth plasma generator for his Engineering 2 project anymore, but he’s making a difference in the community with his new idea and the hard work he’s putting behind the project.

He’s also making his family and the CBC community proud.

“Ben has always been an idea guy, and he loves to tinker,” Henken said. “As a teacher, I loved the idea of making this a student project, but I wanted to make sure our resources were put use in way that could help the cause. Ben has been using our 3D printers since he was a freshman and has acquired a great deal of skill and knowledge in that area, so I thought it was a great fit. I knew he had the initiative and ability, and his personal connection to the problem ensured that his efforts would make a difference.”

(Young has documented his files and process so he can easily share for anyone with 3D printing capability. Anyone interested in those files, or hoping to support in other ways, should contact Henken directly at henkenj@cbchs.org.)