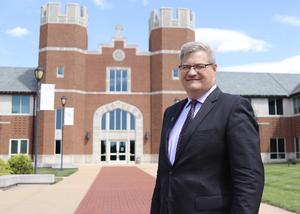 Rob Staggenborg '85 previously served as the Director of Communications for 16 years.
Rob Staggenborg' 85 has returned to CBC High School as the school's new Director of Alumni Relations.
Staggenborg, who was inducted into the CBC Alumni Hall of Fame in 2012, replaces Joe Gunn '79, who left after eight years.
Staggenborg joins the CBC advancement department from Bon Appetit Management Company at Washington University, where he served as Senior Marketing Manager for the past two years, 10 months. He previously served as Director of Communications at St. John Vianney High School, a role he also held at CBC for 16 years as our school’s first Director of Communications.
"Rob is bringing both a familiarity with our culture plus fresh and innovative ideas for new programming," said Rika Beckley, Vice President of Advancement. "With his established alumni contacts from his many years being involved with CBC, we look forward to growing our alumni and constituent engagement."
As Alumni Director, Staggenborg will work to engage alumni from all CBC classes and he will oversee alumni programs in a variety of areas.
“Being a CBC alumnus myself has been one of the highlights of my life,” he said. “As a kid from North County entering the big world of CBC as a freshman in the early 1980s, I have always held Lasallian principles and the teachings of St. John Baptist de La Salle near to my heart. I thank the Christian Brothers and the scores of lay faculty for the strong, Catholic foundation they have built within me. I couldn’t be more excited to get back to CBC and work with alumni from all facets of life.”
As a student at CBC, Staggenborg wrote for school newspaper, The Turret, and achieved several academic honors.
Staggenborg joined the U.S. Army after graduating from CBC and served as an Army photojournalist. His time in the Army brought him to Washington D.C., and eventually to Germany. There, he worked on the staff of The Stars and Stripes in Europe. Returning stateside after his service, he worked as a journalist for the Suburban Journals and the St. Louis Business Journal.
Staggenborg is married to Dr. Amanda Staggenborg, a communications professor at Missouri Baptist University. They have two sons, Adam (6) and Nicholas (4), and a daughter, Logann (13). They are members of St. Joseph parish in Cottleville, Mo. Staggenborg's son, Erik, graduated in 2003. Another son, Jim, attended CBC for his freshman year.
Staggenborg can be reached at staggenborgr@cbchs.org or (314) 985-6098.
Print