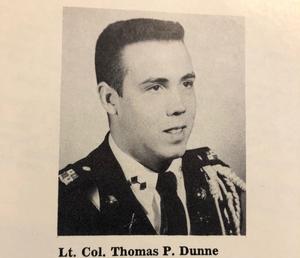 The CBC family mourns the passing of Thomas P. Dunne Sr. '61
The CBC High School community mourns the passing of Thomas P. Dunne Sr., a proud 1961 graduate and benefactor of CBC.
As Chief Executive of Fred Weber, Inc., he served in leadership roles in the design and construction of the current CBC campus. Mr. Dunne’s legacy will be felt by generations of Cadets as his name adorns the Dunne Family Innovation Commons, endowed scholarships named for his parents and his loyal support of Class of 1961 initiatives.
Mr. Dunne loved his family immensely -- his two children and his six grandchildren -- and considered them to be his greatest accomplishments.
"Tom was a personal friend to me for 30 years as well as his alma mater, CBC, since his graduation in 1961," said CBC President Michael Jordan, AFSC. "In all the times we would get together, he would love to talk about his family and ask about Christian Brothers College High School. Tom was a significant benefactor to CBC. His name will be perpetuated through his parents' endowed scholarships at CBC and the Dunne Family Innovation Commons, all of which he made possible for the future Lasallian education of our students."
We ask that our CBC community keeps the Dunne family in our prayers.
St. John Baptist de La Salle … Pray for Us!
Live, Jesus, in Our Hearts … Forever!
OBITUARY
Print