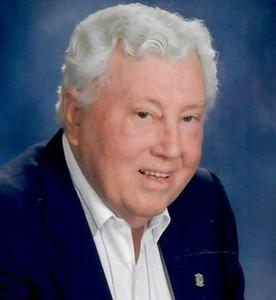 The CBC family mourns the passing of Donald C. Grant ’50
The CBC High School community mourns the passing of Donald C. Grant ’50, a CBC Hall of Fame member, former Board of Directors member and a member of the Signum Fidei society.
Mr. Grant made his mark in the engineering world with Grant Masonry Contracting, a company his father founded in 1946, and was known as a distinguished businessman, philanthropist and family man as well as a mentor and a committed volunteer.
Grant Masonry Contracting’s work has been featured in hundreds of projects throughout the St. Louis region, including CBC High School, the St. Louis Zoo, Missouri Botanical Garden and Gateway Arch Museum. Mr. Grant is a member of the Hall of Fame at both CBC (inducted in 2006) and St. John Vianney High School as well as the Mason Contractor’s Association of America.
Mr. Grant and his wife, Marlene, raised five sons and instilled in them a strong foundation of Catholicism and the value of Catholic education. He has 15 grandchildren and two great grandchildren.
One of Grant’s sons, Barry, graduated from CBC in 1988. Grandson Ty graduated from CBC in 2014.
We ask that the CBC community keeps the Grant family in your prayers.
St. John Baptist de La Salle … Pray for Us!
Live, Jesus, in Our Hearts … Forever!
OBITUARY
Print