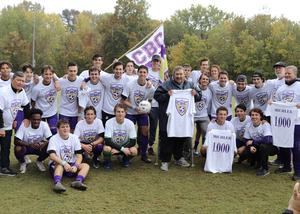 CBC soccer coach Terry Michler ’65, who has won 1,004 games and nine state championships, was inducted into the NFHS Hall of Fame on July 1.
CBC soccer coach Terry Michler ’65 was inducted into the National Federation of State High School Associations (NFHS) National High School Hall of Fame on July 1.
“First of all, I’m thankful to all the players, coaches, administrators through all the years who put me in a position for this to happen,” Michler said. “The level of this is pretty impressive. … It means a lot. I’m very honored to receive it and I’m thankful to everyone who played a part in it.”
Michler, 74, is the winningest high school boys soccer coach in history. He has won 1,004 games and nine state championships during his 49-year coaching career.
Michler was selected for the honor in March of 2020, but the ceremony was delayed. He will be one of 12 inductees into the NFHS Hall of Fame, and one of three high school coaches, who will be inducted during the Hall of Fame ceremony on July 1 in Orlando. Unable to travel for the event, Michler will be represented by his family.
The induction ceremony took place on July 1 at the Orlando World Center Marriott in Orlando, Florida, and was streamed live on the NFHS Network at: https://www.nfhsnetwork.com/events/nfhs/evtfb1ffdd8eb
For more information, visit: https://www.nfhs.org/articles/seven-former-standout-high-school-athletes-headline-2021-class-of-national-high-school-hall-of-fame/
Print