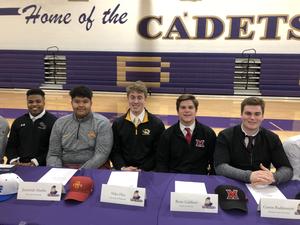 [February 6, 2019] Our school community is proud to announce that thirty student-athletes have made commitments to continue their academic and athletic careers in college. While at CBC, these young men have grown spiritually, served their community, received a premier education and helped lead the school to multiple state championships in athletic competition.

“These young men are great examples of what a Lasallian education is all about. They hold a wide range of strengths and talents and we are proud to celebrate them today,” said CBC President Michael Jordan “Their athletic accomplishments are just the beginning; they have continually impressed us in the classroom, through their service to the community, and in so many other ways. While they will leave our campus at the end of the school year, they will always be a part of the CBC brotherhood.”

“This is a great group of young men,” Streb said. “They have taken advantage of all that CBC has to offer and we are thrilled that athletics has played a role in their development. We appreciate the hard work they have put in here at CBC and we will continue to cheer them on as they compete and study in college.”

The Cadet Student Network carried the event live, and you can watch the video on-demand by clicking HERE.
The full list of student-athletes and the universities they will attend are listed below.

Will Edgar – University of Arkansas-Little Rock